I'm dialing in the settings on my FlightSim Rig.  I'm still chasing the holy grail for FPS, right now I hover around 30 with drops to 20 on busier airports.

I think I will play with the associated programs and see what I can offload to another PC.

A few shots of the FS Rig: (Click the link for full picture, the forum cuts off larger shots) 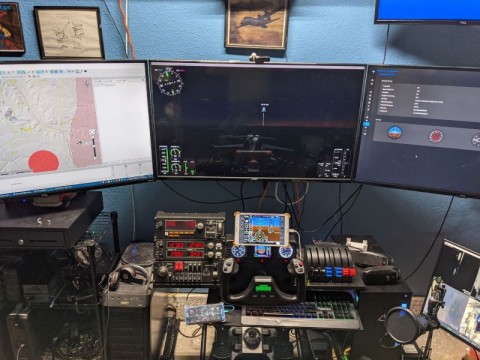 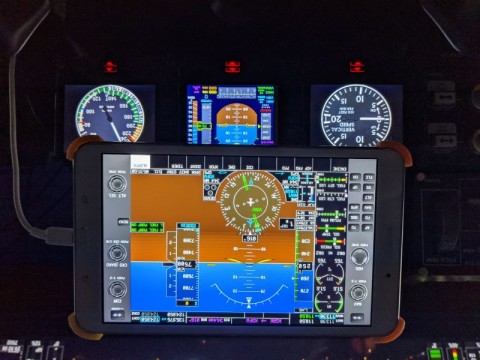 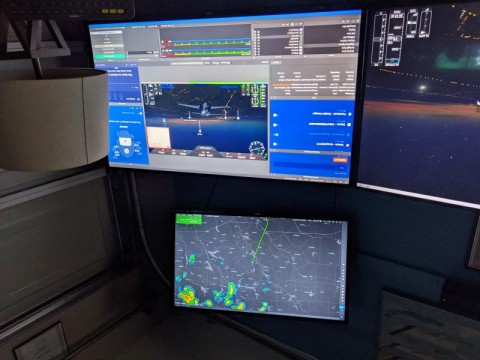 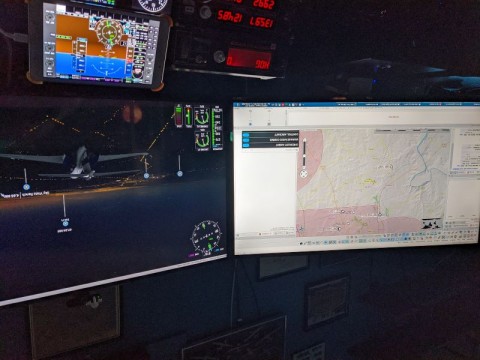 All of that is attached to a https://volairsim.com/VolairSim FlightSim Chassis - Real Comfy  :mrgreen:

The 4 TV's are just mounted to the wall with full motion mounts. I DID purchase 3 LG UHD monitors, BUT, the way the VESA mounts are setup on the LG Monitors, when you attached the VolairSim mounting plates you couldn't attach the power or Display Port cables. (shrug). So rather than buying 3 more monitors I went the cheaper route and got 3 TVs. Originally 3 TCL 43" ones, but one broke so I stole my bedroom Vizio 43" and stuck it in the middle. The 4th TCL was a spare 32" I had in the workshop. The monitor down off to the right beside the microphone is hooked up to an old HP i5. It currently displays my security cameras for the house. Though as I chase FPS I may off load LittleNavMap and some other apps. Especially when Asobo brings decent multi-monitor support. Right now using NVIDIA surround or DisplayFusion to strech the app across three screens results in REALLY poor performance when switching between apps. IF Asobo comes through with Multi-Monitor support I MAY get an RTX 30 series card to run the Sim on the 3 main monitors and use the RTX 2080's to run any additional monitors for other apps. *shrug* That is all up in the air and depends on what kind of investment I want to toss in.

One caveat, using TV's rather than actual computer monitors will give you the larger screens, but depending on the brand and capabilities you may not get full resolution (eg: the TCL's max out at 1920x1080 and the Vizio can go up to 4096x2160) I have all of them set to 1920x180 to hopefully give me the best performance. There is also the fact that the color across all the monitors is slightly different. Calibrating and getting the right color settings can be a REAL pain!

The Tablet is an old Samsung Galaxy Tab 4 running https://www.peixsoft.com/glasscockpit-to-sim-en/Glass Cockpit to Sim For Android.

The old Samsung S6 Edge on the keyboard tray runs https://www.touch-portal.com/TouchPortal which controls OBS Studio for live streaming to Twitch, YouTube, Facebook and Steam. Basically it is a software based StreamDeck allowing me to switch screens, views, send commands, etc to the stream at the touch of a button.

IF (And that is a BIG IF, I get the funds I'm considering the RealSimGear G1000 Suite. (My Wife Spoils me)

As far as software goes,

And to top it all off a quick video of a flight from Robert Gray Army Airfield (KGRK - Ft Hood, Texas) to Dallas (KDFW, Dallas, Texas)in the Asobo Cessna Citation Longitude.

DISCLAIMER: The AI was controlling the aircraft so I could fiddle with all the various software pieces with out having to concentrate on flying at the same time. So I am NOT responsible for the crazy take off or botched landing, lol. Yeah, AI needs a bit of work. I did trim the REAL mess out, like the 360 degree turn taxing onto the runway and the REALLY poor landing BETWEEN runways. When I'm in a better mood and have some time I'll do a "real" flight, hehe.